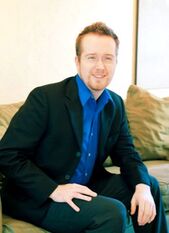 Darren’s numerous community involvement strategies include working with retirement homes, church choirs, bell choirs, and other schools, have earned him the honor “Best of Whidbey” in Teaching  for 2011, 2015, 2016, and 2017 by the Whidbey News-Times.  His choirs have been featured on King 5 News, Fox News Q13, and KIRO Radio as examples of positive growth in arts programs.  In 2012, KCTS 9 awarded Darren McCoy the “Golden Apple Award” for outstanding teachers in Washington and in 2015 and 2017, he was recognized as a quarter-finalist for the Music Educator Grammy™ Award.

SARAH PIZZICHEMI, has been Saratoga Orchestra’s Concertmaster since 2016. A native of Seattle, Sarah made her solo violin debut with the Seattle Symphony in 2004.
Sarah went on to receive a Bachelor of Music in Violin Performance from the University of Texas at Austin Sarah and Ernest Butler School of Music, and she continued her Master of Music in Chamber Music Performance at UT. Sarah earned her Doctor of Musical Arts degree from the University of Nebraska-Lincoln as part of the graduate string quartet-in-residence. Her dissertation, Virtuoso Violinist Maud Powell: Enduring Champion for American Women in Professional Music, adds to research literature in the field of women in professional art music.
Other ensembles she is or has been a member of include, Skyros String Quartet (10 year anniversary in 2020!), Lincoln (NE) Symphony Orchestra, Auburn (WA) Symphony, Pacific Northwest Ballet Orchestra, Seattle Collaborative Orchestra and Waco Symphony.
Saratoga Orchestra of Whidbey Island
P.O. Box 1524 | Langley, WA 98260
©2020
Powered by