Saratoga Orchestra
Check out our new webpage for PWNCI 2021 registration: 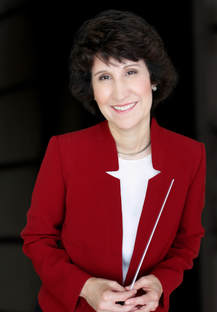 Named as one of the "Top 30 Music Influencers" by Musical America Worldwide, Conductor, DIANE WITTRY,  is the Music Director and Conductor of the Allentown Symphony, PA and the Music Director and Conductor of the Garden State Philharmonic, NJ.  Diane Wittry is known for her innovative programming and her engaging audience rapport. She is a conductor who “specializes in finding creative ways to make the music fresh, accessible, and exciting.”

Diane Wittry is sought after as a teacher of conducting.  Her book Beyond the Baton, (Oxford University Press) about artistic leadership for conductors has become a standard text for the industry. Her second book, Baton Basics - Communicating Music through Gestures, is used at Universities for their conducting classes and for International Conducting Workshops in Bulgaria, Ukraine, and the United States.

Wittry has been the subject of profiles in The New York Times and Newsweek, and has received many honors and awards, including the American Symphony Orchestra League’s Helen M. Thompson Award for outstanding artistic leadership of a regional orchestra.  She is also only the third American to be named - in recognition of her leadership in the arts and humanities - the recipient of the prestigious Fiorino Doro Award from the City of Vinci, Italy.


More information about Diane Wittry's work is available at: www.DianeWittry.com
​ 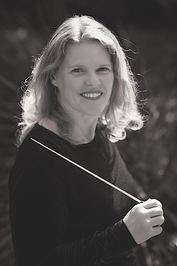 Anna Edwards has made a significant impact to the Seattle music scene as a performing artist, music instructor, and orchestra conductor. After performing as a professional violinist and music educator for over 25 years, Anna shifted her focus from instrumentalist to conductor. After training with Michael Jinbo at the renowned Pierre Monteux School for three seasons, she received her Doctor of Musical Arts Degree in Orchestral Conducting from the University of Washington. She currently balances her time between conducting in the Pacific Northwest, serving as a guest conductor/clinician across the country, and developing young musicians through instruction and collaboration with professionals in concert settings.

Anna leads the Saratoga Orchestra as Music Director and is founder, and music director of the Seattle Collaborative Orchestra.  Anna is dedicated to nurturing young talent and creating musical diversity through innovative approaches to music education through creative programming and audience engagement in her role as Music Director in these ensembles.

"Anna's enthusiasm for promoting talented youth, creating community engagement, and nurturing musicality have been described as a win, win, win venture on so many levels. She has taken a creative approach to career development and continuing education, community building, music education, reinvigoration of classical music, [and] encouraging the creation of new music.” – Dave Beck, Classical KING-FM radio host
​Active Conductors (Fellows and Associates) should arrive on Whidbey Island Monday morning and depart following the final concert. Accommodation will be made for those needing to arrive one day prior or depart one day after the final concert.
​​
​Auditors will be invited to observe all podium sessions and participate in all study and special topic sessions. Auditing is an excellent way to study the scores and learn from the faculty and from your colleagues. Auditors will be responsible for their own housing arrangements but we are happy to make suggestions.

All conducting sessions will be videotaped. A SD card will be provided for rehearsal sessions, with a viewing station available for video review.  The final performance will be professionally videotaped with pro audio. ​​​
QUESTIONS? We are happy to answer them.  email: orchestra@whidbey.com  or call 360-929-3045.